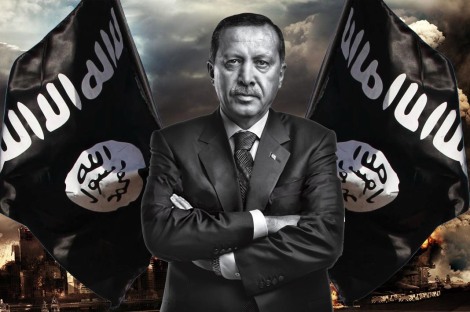 As the Brussels incident is being discussed, one must be very careful in positing bold statements precisely because not all the facts are already on the table. In fact, it is very dangerous for anyone to quickly formulate a theory and spread it across the political spectrum.

But one can ask questions and try to find answers to those questions as the event unfolds. We know that the Zionist media is known for falsifying data (as in the case of WMDs in Iraq and even Syria) and bludgeoning much of the West with their lies.

In fact, we know that they have all mastered psychological warfare by now, since they have been using it for decades. However, sometimes they would present a little bit of truth in a torrent of lies. That’s why they have been able to convince the masses with their propaganda.

Having said all that, we do have questions or concerns regarding the Brussels incident. One week before we were told that something had happened, Erdogan told much of the world:

“There is no reason for the bomb which exploded in Ankara not to explode in Brussels, where an opportunity to show off in the heart of the city to supporters of the terror organization is presented, or in any city in Europe.

“Despite this clear reality, European countries are paying no attention, as if they are dancing in a minefield. You can never know when you are stepping on a mine. But it is clear that this is an inevitable end.”[2]

In a serious international court of law, Erdogan would have almost certainly been prosecuted for such a statement. But since much of the West has been bamboozled by Erdogan’s terrorist activities, no one can seriously proceed to challenge him (except Putin, of course). Of course, we are not blaming Erdogan for the incident, but it shouldn’t surprise anyone if he turns out to be a villain or an accomplice.

In fact, we have enough evidence which incontrovertibly indicates that Erdogan’s family has been involved in terrorist activity from time immemorial. This has been admitted by Zionist outlets such as the Huffington Post. Putin himself caught Erdogan sleeping with terrrorists.

Since Erdogan ascended to the throne in 2003, “Turkey has taken a harshly authoritarian turn, embracing Islamic terrorists of every stripe while picking fights it can’t finish across the region…”[3]

Erdogan’s terrorist activity has also been thoroughly documented by David L Phillips of Columbia University’s Institute for the Study of Human Rights. If Erdogan can stab Russia in the back, then he wouldn’t hesitate to use covert means to get his dirty work done.

Even the New Yorker, of all places, said back in 2012 that Turkey “appears to be the most repressive country in the world… ninety-four reporters are currently imprisoned for doing their jobs.”[4] In 2014, the EU got upset because Erdogan couldn’t stop infringing on people’s rights. How did Erdogan respond?

“The EU should mind its own business and keep its own opinions to itself.”[5]

Throughout that time, America remained silent.

There is another problem here as well. Whenever the Zionist media tells us that some bomb got exploded in Europe or America, the whole world goes to universal mourning. People need to know what happened, and it has to be reported ad nauseam.

But whenever the Zionist ideology ends up slaughtering and pillaging multiplied thousands of innocent people in the Middle list, much of the Western world goes to universal silent. Get this: more than 18,000 civilians have already lost their previous lives in less than two years in Iraq alone![6] There is more.

Back in 213, it was reported that “more civilians killed by US drone strikes than reported.”[7] “It takes 28 civilian lives to kill a single terrorist leader – UK human rights group.”[8] The C.I.A. itself has been responsible for terrorizing civilians in Pakistan “24 hours a day.”[9] And then this: “Nearly 90 Percent Of People Killed In Recent Drone Strikes Were Not The Target.”[10]

So, aren’t we saying that people in the Middle East matter very little by playing double standard? Aren’t we abiding by the essentially Talmudic standard, which says that the Goyim (and in this instance the Muslims) are donkeys?

As the saying goes, once you open the floodgate, then you won’t be able to control the water anymore. America opened the floodgate long ago when it allowed the Neoconservatives/Neo-Bolsheviks to take over foreign policy.

Now New World Order agents are creating monsters out of thin air and are asking American soldiers to go kill them at the expense of virtually every single American. We are also are seeing that much of the world is paying a huge price. The moral of the story?

You cannot make an essentially diabolical deal with terrorist states like Turkey and expect to live happily ever after.

Mr. Erdogan: How did you know something was going to happen in Brussels again?