“We came, we saw, he died,” exclaimed an ebullient Hillary Clinton, as she exulted over the horrific death of Libyan leader Moammar Gaddafi, who was sodomized with a bayonet before being brutally murdered by rampaging militiamen.

Visiting Tripoli, the Libyan capital, the American Secretary of State was eager to take credit for the “liberation” of yet another Muslim country by Western powers acting in concert. An extensive and quite revealing New York Times investigation (Pt. 1 here, Pt. 2 here) reports on “a ‘ticktock’ that described her starring role in the events that had led to this moment. The timeline, her top policy aide, Jake Sullivan, wrote, demonstrated Mrs. Clinton’s ‘leadership/ownership/stewardship of this country’s Libya policy from start to finish.’ The memo’s language put her at the center of everything: ‘HRC announces … HRC directs … HRC travels … HRC engages,’ it read.”

These days, however, out on the campaign trail, Mrs. Clinton is not quite so eager to take ownership of what can only be characterized as an unmitigated disaster, a case history dramatizing the perils of “liberal” interventionism from inception to bloody denouement.

Mrs. Clinton was easily won over by the Libyan rebels who presented a utopian view of what the post-revolutionary era would look like: there would be free elections, a free media, women would be able to “do it all,” and everyone would get a pony. They “’said all the right things about supporting democracy and inclusivity and building Libyan institutions, providing some hope that we might be able to pull this off,’ said Philip H. Gordon, one of her assistant secretaries. ‘They gave us what we wanted to hear. And you do want to believe.’”

Confirmation bias in a writer or reporter is fatal, but only to his/her own career: in a Secretary of State it is a death sentence for thousands. And that’s exactly how it turned out in Hillary’s case.

To this day, Clinton avers that “it’s too soon to tell” whether the Libya intervention qualifies as an unmitigated failure – even in the face of marauding militias, no less than two self-declared governments, the horrific death of an American ambassador at the hands of the very militias we empowered, and the incursion of the Islamic State, al Qaeda, and other terrorist outfits. She refused to be interviewed for the Times article.

While Defense Secretary Robert Gates and Vice President Joe Biden opposed regime change, Clinton took the side of the younger “back-benchers,” as the Times calls them, who wanted to go in there and “get on the right side of history.” The misnamed “Arab Spring” was in full bloom, and the media was pushing the idea that this was a great awakening of “democracy.”

Hillary, who had hesitated at first to jump on the bandwagon during the Egyptian events, made up for lost time in Libya. She “pressed for a secret American program that supplied arms to rebel militias, an effort never before confirmed,” the Times reports. Those arms would be used to attack a CIA outpost in Benghazi, where Ambassador Stevens would fall at the hands of these very militiamen. 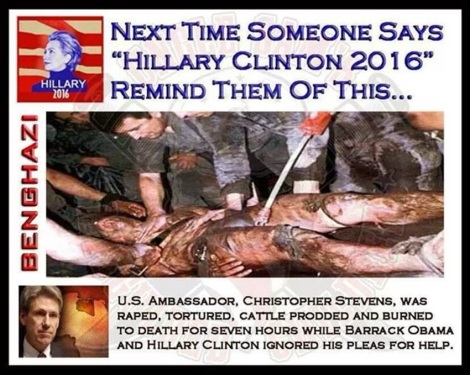 While initially the US was purportedly acting only to prevent civilian deaths at the hands of Gaddafi – a “humanitarian disaster” that turned out to be nothing but media-driven war propaganda – Hillary and her staff soon fell down the slippery slope to actively aiding the rebels. The ‘responsibility to protect” soon became another regime change operation, as in Iraq.

“’We don’t want another war,’ she told [Russian Foreign Minister Sergey] Lavrov, stressing that the mission was limited to protecting civilians. ‘I take your point about not seeking another war,’ she recalled him responding. ‘But that doesn’t mean that you won’t get one.’”

The French were pushing particularly hard for a more muscular Western response, and in a meeting with French and British officials the frogs played their “trump card,” as the Times describes it. Although the meeting was convened to decide whether to act, Clinton was informed that “French fighter jets were already in the air” – but, added the French official, “this is a collective decision and I will recall them if you want me to.”

This certainly gives new meaning to the phrase “leading from behind” that administration officials used to describe our role. Clinton was supposedly “irritated,” but she capitulated readily enough.

“’I’m not going to be the one to recall the planes and create the massacre in Benghazi,’ she grumbled to an aide. And the bombing began.”

The Libyan leader, who had ruled his country for more than 40 years, knew what the outcome would be. His regime, “he railed to anyone who would listen,” was Libya’s sole defense against Islamist crazies who would overrun the country if not for him. But no one in the West was listening.

Clinton was jazzed that this was supposedly a model of “multilateralism,” with the Arab League as well as the Europeans in on the deal. But that proved to be the original mission’s undoing as Qatar – a little shithole of an oil-rich country long dependent on the US military for its miserable existence – starting funneling weapons to Islamist militias with dubious credentials. This is how we were pressured into going from “humanitarian intervention” to regime change. If we didn’t arm the “good” militias, Clinton argued, the bad ones being empowered by Qatar would prevail. Yet military officials were not convinced:

“NATO’s supreme allied commander, Adm. James G. Stavridis, had told Congress of “flickers” of Al Qaeda within the opposition. Mr. [Tom] Donilon, Mr. Obama’s national security adviser, argued that the administration could not ensure that weapons intended for ‘the so-called good guys,’ as one State Department official put it, did not fall into the hands of Islamist extremists.”

As the Times makes all too clear, Clinton has a bias in favor of action, as well as relying on what can only be called a woman’s intuition. Her aides, the Times says, “described her as feeling her way through a problem without being certain of the outcome.” Another word for this is recklessness.

Clinton eventually succeeded in persuading President Obama, who signed a presidential finding authorizing a covert action to overthrow Gaddafi. US weapons poured into the country. The militias were unleashed, while Clinton hailed the elections that were staged shortly after the “liberation.” Yet as it turned out the elected officials had no real power: the guns were in the hands of the militias, who extorted government officials for more weapons in return for not being killed. The country went to pieces rather quickly, but our Secretary of State and would-be President had already moved on: she was too busy plotting regime change in Syria to be bothered with the unraveling of Libya. 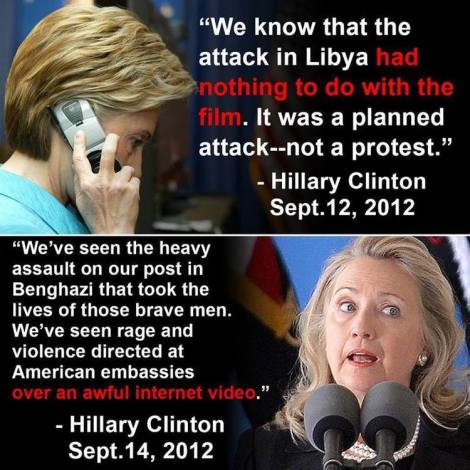 Clinton wanted to make a deal with the Qataris that we would arm their favored radical Islamists in Syria if they would lay off aiding al-Qaeda-type crazies in Libya. But when the President vetoed her Syrian regime change plan, the proposed deal was off – and Libya continued to deteriorate into the Mad Max scenario we see today.

She quit the State Department after losing the internal debate over Syria, and is now campaigning for the highest office in the land on a platform of “love and kindness.”

Not that there’s much “love and kindness” in the country she destroyed almost single-handedly.

This Times story dropped like a stone: although normally one would expect such a damning account of a presidential candidate’s tenure as Secretary of State to be grist for the media mill, there wasn’t so much as a peep about it from anywhere else – including from the Republican candidates, never mind from Bernie Sanders.

A woman who could very well occupy the highest office in the land, with near total control of US foreign policy, basically committed an entire nation to perdition. Where’s the outrage? Who is drawing the lessons learned from all this?