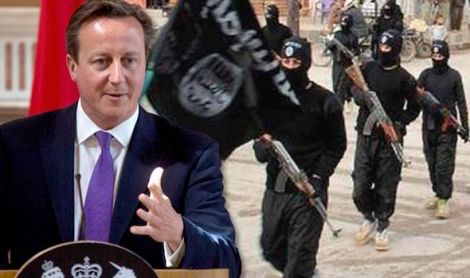 Together with the United States and its regional “allies,” Cameron used the claim of 70,000 “moderate” Syrian rebels ready to ally with the “coalition” as the centrepiece of his argument to expand the illegal war on Syria under the pretext of fighting ISIL – their own spawn. Now after more than four years of destruction and chaos, Cameron admits his claim was “false” – although he still has the guts to insist “it was the best estimate.”

Clear enough, Cameron has finally admitted the figure was false, that many of those mythical rebels were narrow minded zealots and hard-core jihadists that joined the ISIL and Al-Qaeda ranks the moment they got their hands on American-British weapons, and that there are not “enough moderates” to decapitate the regime in Damascus in the way Britain wished.

Most of Cameron’s comments also appear centred on shifting blame, saying it “wasn’t a figure I invented” but came from intelligence agencies as a “best estimate.” He does, however, refuse to name the agencies that the figure came from. Well, it is better to offer no excuse than a bad one. Cameron’s rhetorical charade notwithstanding, what this darkly implies is that he is not upset that he made de facto alliance with ISIL and then lied to the world; he is upset that from now on no one will ever believe him. He couldn’t be more accurate:

At that time, Iran, Russia and Syria questioned Cameron’s figure immediately but to no avail. Simply put, Team Obama, Britain and their regional “allies” went ahead and made the terrible mistake of investing in terrorist groups and extremist elements they thought were “moderates” and could help them in toppling the government of President Bashar al-Assad.

As expected, the regime changers also authorized an open-ended war against terror, with no geographical limits, no timetables, no prohibitions on any sort of use of force, and no suggestion of an expiration date. Using ISIL as an excuse, they further bankrolled a string of new military bases in Iraq, Syria and Yemen to expand their illegal drone wars and colonial aggression. And all this only meant one thing: Further mayhem throughout the Middle East and North Africa.

Ironically, those who went ahead and supported various terrorist outfits, later blamed Iran and Russia for the Syria blowback, including the deepening refugee crisis in Europe! They claimed the decision by Tehran and Moscow to back the Syrian government in the war against all manners of terrorism and extremism left a big vacuum, which foreign-backed jihadists filled. This is while it was Team Obama, its lackeys, and the “War on Terror” franchise that provided military support, training and funds to the “moderate” head choppers in both Syria and Iraq. They were also the ones that “accidentally” ignited sectarian violence via proxies in the Muslim world.

Nevertheless, Syria is still suffering, where anything is better than lies and deceit, including white lies. The reality is clear though: The de facto alliance between various terrorist cabals, Team Obama, Britain, and regional deadheads was a strategic mistake from day one. It turned Syria into a failed state, destabilised the region, killed over 250,000 civilians, and sent over one million desperate souls to Europe with deadly consequences.

PM Cameron is free to assume “it wasn’t a mistake he made;” but he is wrong to assume he can now shrug off responsibility. Lest he forgets, the “War on Terror” franchise and regime change fantasy came apart so easily as they were held together with lies.